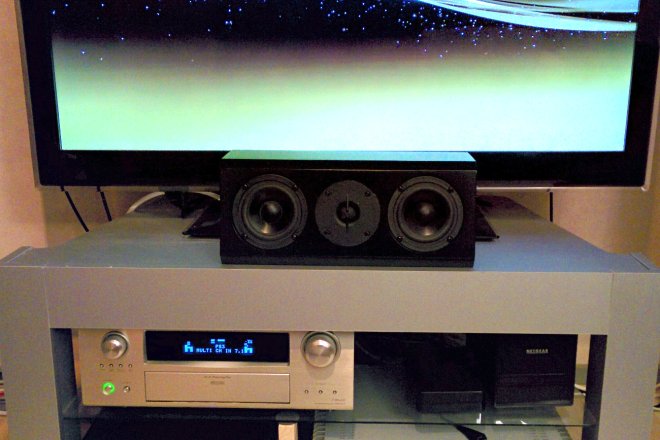 All three coats of paint is dry, the drivers are connected and mounted and it plays. Beautifully. Well balanced to the front satellites. I’m happy. I will let it lie on its back a few days to let the pain completely cure.

Filters glued in place. Very tight space. Some slight remodeling of capacitors had to be done to make it fit between the speakers. 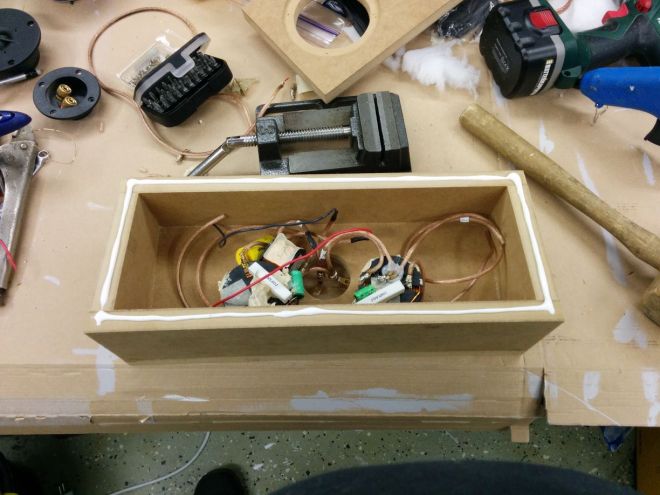 Then moment of truth, gluing the baffle on closing in the wires and filters forever. I hope I have connected everything correctly. 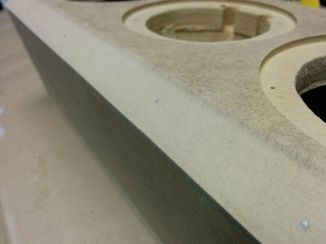 Glued and nailed. I didn’t think that one through as the edges would get chamfered and the nails are at those edges. I used the router very slowly with a cheap router bit. Worked out ok.

Then sand and prime.

And that is all I have time for today. More sanding and priming next time.

I managed to extract the filters from the old center speaker, as well as the “ludd” that dampen the air in the enclosure.

I cracked the glue joint with a chisel and a lot of persuation. I dreaded that the three filters would be tangled together as one and I would have had to understand it.

Luckily for me there were three separate filters. One highpass for the tweeter and two bandpass (if I remember correctly) where the one for the outer speakers cut of a bit lower than the front ones. I traced the wires from the speakers and found (and remembered) that when first built the phase was wrong on the tweeter and we had to switch phase a few times until we found out that it was the tweeter that was out of phase. The wires had been swapped on the filter and when connected according to the markings it became inverted. The filters were glued to the lower box which had a aluminium sheet at the bottom for some unknown reason (can’t fathom what difference it would make as it isn’t magnetic). Strong freaking construction adhesive. But with some careful chiseling I pryed them free.

I hade to rearrange a few components on the filters to make them fit into the small space behind and between the speakers. This is the way they must be positioned.

My angled cuts were not perfect and there was gaps when laying the baffle on it. I glued a bunch of sand papers to a piece of hard board to have a large abrasive pad that lay flat on my table. 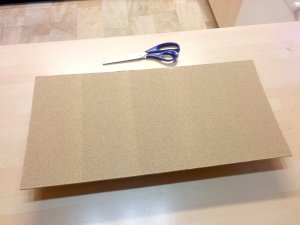 I then pushed the enclosure over it until the edges lined up.

I recut the baffle and routed out the insets for the speakers. I also recut the pieces for the sides as I wanted to make the enclosure deeper. The box is partly glued up now. I keep my glue in a used mustard bottle. 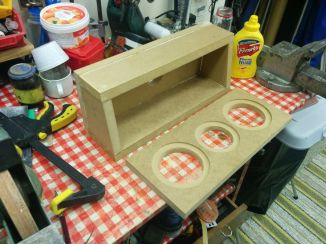 Glued box with baffle in front

This is how it will look.

I also remembered that the tweeter needs a separate enclosure and made a little round box to be mounted behind the tweeter. I should have used the router for this but it was tucked away so I used a couple of holesaws instead. The center hole will be used for the leads and then filled with hotglue.

I have finished the surround speakers.

Wiring thick cables of many thin strands together is a bit tricky. Here’s a neat trick I did to not lose my mind while burning my fingers off.

The sound have not changed much to the old ones. They are one speaker less and about 2/3 of the size. The sound is not as deep but given that they are going to play the surround channels they are well up to the task.

I tried playing music at full range with them and they sound a bit thin but still lots of detail.

I have started installing the drivers and terminal to the surround speakers. 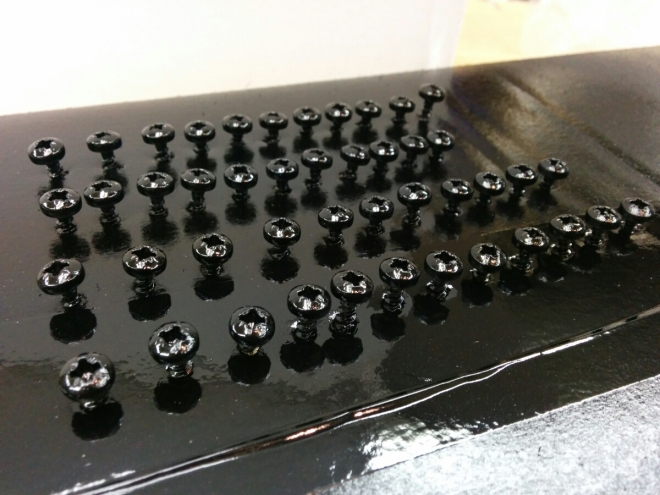 Could not find good looking black screws so I spray painted a bunch black. Turned out nice, I think.

Two coats of primer and the first coat of paint done.